Story and Photos by Rickson Poki.

Earlier this year, Rickson Poki, an Executive Assistant of MAF PNG’s Country Director’s Office, and Joseph Tua, a new pilot, had the privilege and opportunity to spend a few days at Bosavi village.

Rickson, who everyone calls Ricky, spent most of his life growing up in Port Moresby, where his father was working as a paediatric surgeon at Port Moresby General Hospital. Originally, he comes from Mt. Hagen. Joseph is from Pangia in the Southern Highlands Province and also spent most of his life growing up in Port Moresby. Joseph got accepted to join MAF PNG as a pilot and is getting ready to fly in Western Province, specifically for the Area Health Patrol Programme. He arrived in the programme in April and part of his MAF Orientation programme was a village trip in order to see first hand how a community benefitsfrom its airstrip. As Ricky and Joseph are more or less city boys, their time at Bosavi was a real eye opener. Ricky shares the highlights of his experience.

Tammy Maiyo became our local guide. He looks after the house that we stayed in which was built and used by Australian missionary Keith Briggs and his family. Tammy previously worked with the missionaries living there, where his wife Betty was the ’hausmeri’/ helper.

One morning, Joseph and I went with Tammy to his land in the bush where he keeps his pigs and has a plantation of 'saksak' trees (Sago Palms). He showed us how 'saksak' gets prepared and made. 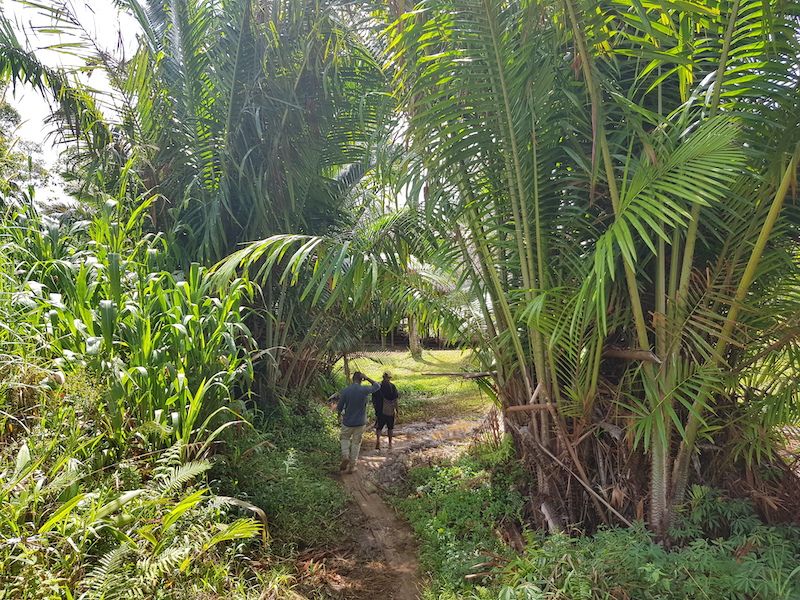 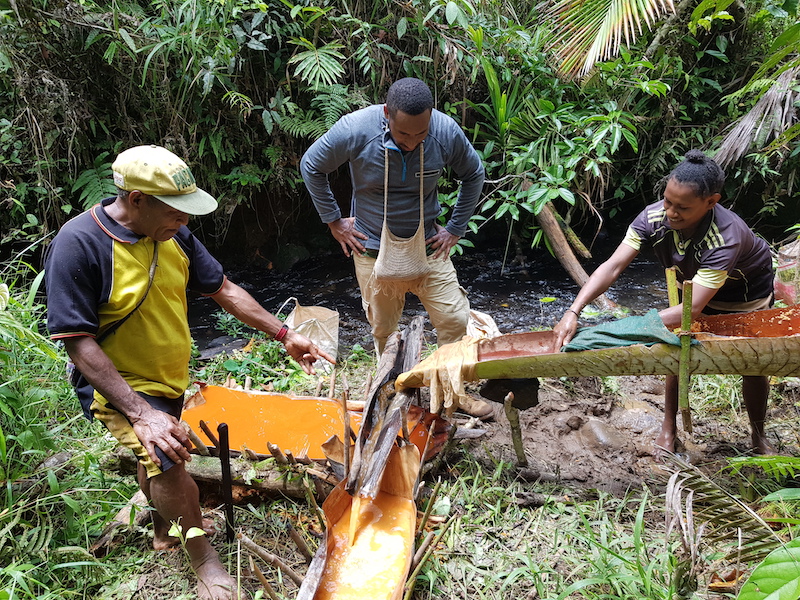 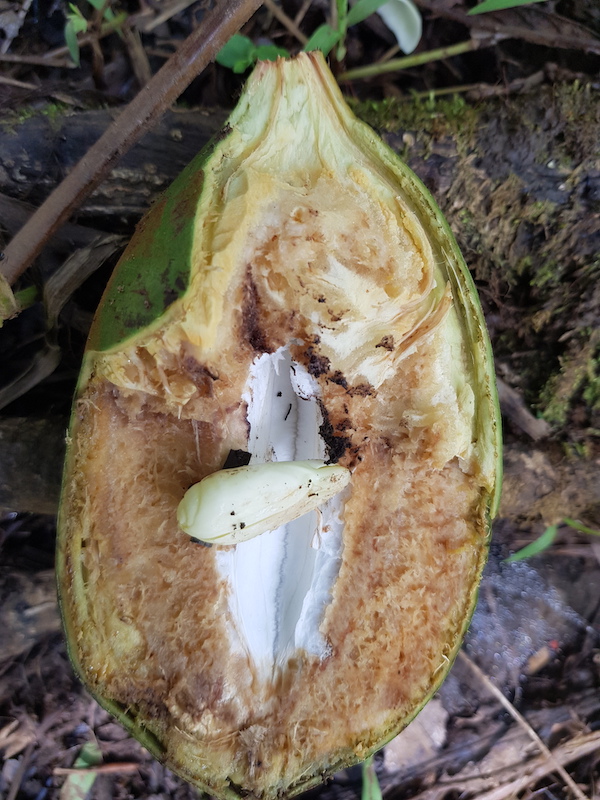 We took some pictures and about two hours later we returned home for lunch prepared by Betty, Tammy's wife. Betty prepared some saksak for us; but to be honest, it was too dry for us. We ate it anyway.

The next day, around 11 in the morning, Joseph and I decided to help Tammy with clearing up the runway in preparation for our Thursday pickup. Straight after breakfast, we got the old lawn mover out of the shed, which Tammy has used for more than 15 years now. We headed off to the far end of the runway and started mowing the patch of grass that was growing too high. After getting a rundown from Tammy on how to use the lawn mower, Joseph and I took turns working our way up and down the airstrip. We finished around 1pm, had lunch and then headed straight to a watering hole. It was a good day!

Enjoying the waterfalls despite the leeches

The following day, Joseph and I decided to go and see the waterfalls of the Semen River. A local landowner, Tonsi, took us to see the falls with his son, Ali. After a quick briefing about the walk we were to go on, including some information about blood-sucking leeches, I made up my mind that I was not letting these blood suckers get on me.

Now, all dressed up and covered, we headed out to the falls. Joseph had a good wash under the waterfall and we took some amazing pictures there. Two hours later, we arrived home just in time for lunch which was already prepared by Betty. Then, to my surprise, I found a leech on my left sock! I was going to make sure is would not have any of my blood; so I gave it a good clean death – a fiery death!

Flying back to the city

Low cloud cover over the airstrip

Today, Joseph and I woke up really early. We switched the two-way radio on for MAF’s schedule time. It's been a week, and even though it's been fun here, we were looking forward to heading back. There was a lot of rain last night and the clouds were still hanging fairly low; but we were hoping for good weather today. Overall, God has been good to us!

Looking back and reflecting on the various conversations we had with the people there and my observations, I learnt a lot about my own country and people. Bosavi has taught us a lot during our week there. We learnt many things about the people, their culture and way of life, their struggles, and how they can cope with the simple necessities of life. It was also a time for me to reflect on how truly blessed I am.

I also left with a burning desire in my heart: to see my fellow Papua New Guinean people – the Bosavi people – experience a better life and to see their lives transformed not only spiritually but physically also.

A traditional house in Bosavi: It is above the ground for ventilation and to keep the house cooler as it can get very hot

The Bosavi people are a very simple people. They speak a native language called‚ ‘Kululi', meaning ‘language of the real men’.

They survive mostly on Sago or 'saksak' as their main source of food. The more saksak one has, such as a plantation of Sago Palms, the higher one’s status is in the community. Other food includes sweet potato, corn, banana, wild ferns and greens. Meat is very rare, and only when necessary, is hunted for in the wild.

Water is easily accessible as they have many fast-flowing streams around their area.

A house in the bush where pigs are kept and including a rest area when working in the bush. The basement is also used to store fire wood to dry out

The people of Bosavi are very peaceful and keep to themselves. Given Bosavi's location – being in between the two provinces (Western and Southern Highlands) there is always a continuous movement of people back and forth through Bosavi. Travellers of all sorts come through – some traveling for days to go to the nearest store to buy food, others are looking for medicine at the nearest aid post, and then you have notorious gangs that travel from Southern Highlands to the Western Province to steal from the companies there. Because of this, the people of Bosavi are used to having unfamiliar faces pass through their community. This also poses a threat to the young folk of Bosavi as they can be easily influenced to join the gangs to look for an ‘easy’ life. Money has little value. The people are content with their garden food and saksak, fresh flowing rivers and the wild animals they hunt for as meat. They do need a few store goods such as salt, oil, flour, noodles and tinned fish but these are not sought after if they cannot get them.

Contact with the outside towns is almost impossible as there is no network coverage in this part of the country. Their only way of communicating is through a two-way HF radio that is kept at the mission house near the airstrip. It’s used by agents to communicate with other agents near the area and call for medevacs or contact small airline companies such as MAF, SIL and NTM for booking requests.

This week long Bosavi experience was truly incredibly – at the same time quite challenging for me, even as a national Papua New Guinean. I am not used to seeing life so difficult, growing up as a city kid. Yet I see the people in remote areas are content. They do not complain about electricity or water or other things that we consider necessary; instead, they embrace what is available and make the best of it!

My final experience in Bosavi sums up what I think my MAF village orientation was supposed to teach me. It was Thursday morning, the day that we were scheduled to return to Mt Hagen.

Joseph and I had gone through all our food stock that we brought with us for the week. We were looking forward to going back and getting home in time for Easter celebrations with our families.

The weather that morning did not look promising as we waited on the radio (two-way radio) for the MAF Mt Hagen base to let us know when the aircraft would come to pick us up. I was so looking forward to seeing our MAF plane land! At around 11:15 am we heard a plane pass by over us, but it was too foggy and it was not possible to land. My heart sank as I heard its sounds getting smaller and smaller until there was complete silence – I was lost for words. I gave one last radio call to check, and sure enough Reji, our Flight Scheduler and Logistics Officer, came back with news that another MAF aircraft would be able to make one stop at Bosavi sometime in the afternoon.

There is the plane!

I remember watching as the fog was lifting. It was 2 pm now. What looked from afar like a big bird was all too familiar to me. As it got closer, I felt my heart start jumping for joy as the engine roar of the MAF plane got louder and louder. As MAF joined the circuit, I could see the distinct colours on the aircraft.

My heart felt like it was going to jump out of my chest, but there was also an overwhelming sense of peace – something deep inside telling me that everything would be okay. That was when it hit me: “So that's what they feel like,” I thought to myself. I thought of mothers in the remote villages, parents walking their sick children for days, families needing food supplies, materials and other necessities.

I could finally see from their perspective – MAF is important to them, it is their lifeline, it brings hope, it brings life, it brings change; but most importantly it spreads the love of God through aviation and technology.